In Appreciation of Ruth Bader Ginsburg

I read the Appellate, then Supreme Court decisions on the VMI case in law school and they absolutely rocked my 23-year-old mind! It was my introduction to Ruth 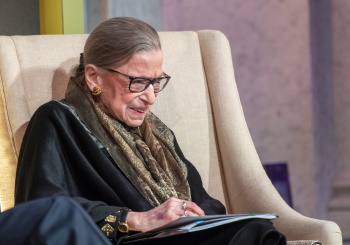 In essence, it said that women are *literally* entitled to all of the same protections and *opportunities* offered to similarly suited men; that women are not second class citizens and that a consolation prize to women (in that case the offering a women’s school that proposed to offer the same benefits but in reality did not) in lieu of the real thing (attendance at the Virginia Military Institute) does not suffice under the law.

For me, as a woman with an athletic childhood, budding legal ambitions, and (at that time) not a domestic bone in my body, I really didn't fit the mold of what I thought a woman should be.  This Supreme Court decision made me see that maybe the system, with all of its little ways of telling women (me) to sit down and that I "wouldn't want to do such-and-such anyway, that’s just boys' stuff" comments; maybe those were wrong and I have deserved a spot at the table all along.

Now, through my law practice, I fight for justice for my clients in divorce, custody cases, and guardianship cases; ensuring that my clients' opportunities are unhindered by abusive or dysfunctional family dynamics or economic circumstances caused by family dynamics.